Except for the year 2007, I kept all my planners for the last 5 years. The 2007 planner is missing in the above photo because I only kept scraps of it. Now I find it hard to put context to each random scribble that’s why I decided to keep every page of my future planners intact even if there are uneventful weeks or embarrassing memories.

I think that collecting planners is a vanishing hobby in the face of recent technological advances. Most people would probably have their things-to-do in their desktops, PDAs and phones by now. I however, still chose to write my goals by hand, which is a surprising preference for a paperless advocate like myself. I also happen to have a bad history of losing mobile phones so it may take me awhile before I would be put my schedule in a smart gadget anytime soon.

While there are still those who embrace challenges as the day unfolds. Yes, I also welcome uncertainty because there there are things that are beyond my control such as the weather, traffic jams and my appetite. But most of the time, I would rather write my vaguest plans at the back of an invoice rather than put everything to chance and good fortune.

I also gave up saving stickers for coffeeshop planners where everyone else was catching up on the trend. Since 2009, I bought the generic ones from National Bookstore, which was also cheaper than your usual coffee latte. So you could just imagine my surprise when at the start of 2011, I got 3 more planners from my friends: Our COUNTRY is in my planner by Team Pinoy, My Awesome Lifebook by Anton Diaz and the remaining one is from an electronics supplier. 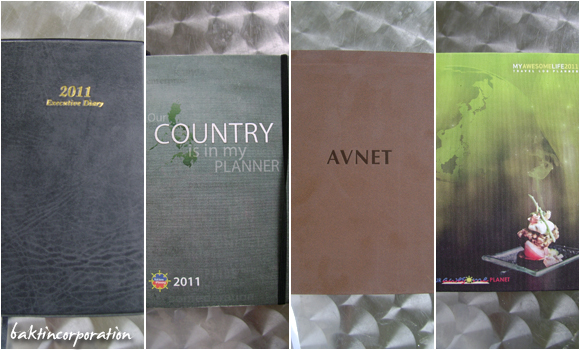 Many thanks indeed to LM and Adelle for the Our Country is in my planner, the NCR Labs-Cebu team for the My Awesome Lifebook and Athena for the AVNET planner.

The concepts behind the first two are noteworthy by the way. The Team Pinoy planner advocates patriotism and empowered citizenship while Anton Diaz’s planner pushes local tourism and adventure. Initiatives like these would definitely raise the local planner business up a notch. It is not a matter of stickers and patronage but also of concepts and differentiation that would continually redefine the game.

But the bottomline that I would like to underscore is just goal setting. It doesn’t matter if it is written on a traditional medium or take an electronic form or only exist in your most trusted set of neurons in your head, as long as the discipline is there. This exercise would help you define why you wake up every morning and how each of those mornings would bring you closer to your goals. 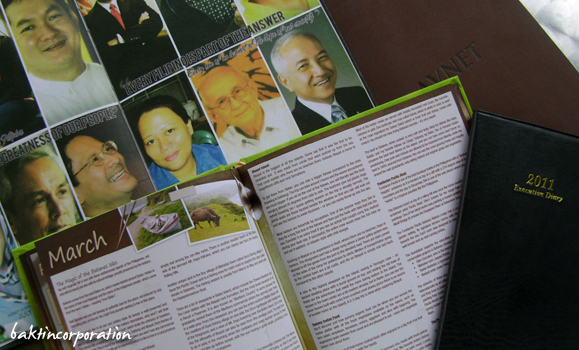 The last sentence is brilliantly captured in a question posed by an instant coffee commercial: “Para Kanino Ka Bumabangon (For Whom Would You Wake Up)?” Aside from encouraging us to drink their brand every morning, I think that it also begs us to reexamine our our weekly work deliverables, monthly payables and annual travel bucketlists and see how these would become part of even something bigger than ourselves. If seen in that light, then all our plans for 2011 would no longer be just for our own satisfaction, survival and enrichment.

I do know for Whom would I wake up every morning. It is not anymore for the alarm clock, the scent of breakfast or out of habit. I also recognize that I can fill up my planner from cover to cover, but apart from God’s will, everything would be in vain. It was never in my hands in the first place. But I do hope that at the very least, 2011 would bring in so much surprise, promise, and meaning to me and all my blog readers as well.

How about you, what planner are you currently using?

Of rubber slippers: a fond farewell and a new beginning

Of Orcs and Legos

Here, there and everywhere