The CT (City Tour) was my first organized tour in Puerto Princesa. It is half-day long and has five stops. I requested a friend of a friend to book one for me during my first day in PPS.

We initially had a ‘running tour’ of the PPS Baywalk, Plaza Cuartel and the Puerto Princesa Church, before heading out for the Crodocodile Farm or the PPCRC, our first destination that afternoon. 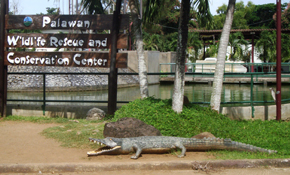 Palawan Wildlife Rescue and Conservation Center
The PPCRC originally was a commercial establishment that breeds and sells Philippine crocodiles. Aside from crocodiles, it also has a nature park that houses other animals which are endemic to Palawan. 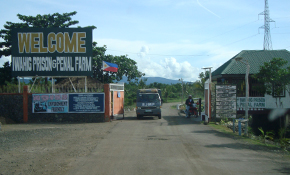 Iwahig Penal and Prison Farm
The Iwahig Prison does not
look like any other prison bar in the Philippines. It is unique because some of its inmates are given the freedom to roam around the vast property. Escaping is technically impossible since there are no walls or physical barriers in the first place. 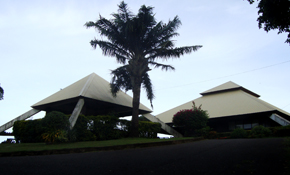 The property, which is opento the public, is owned by Former Senator Ramon Mitra. It was through his efforts when he was still a congressman back in the early 70s, that Puerto Princesa earned its cityhood. At the ranch, one could see a panoramic view Honda Bay on the east. 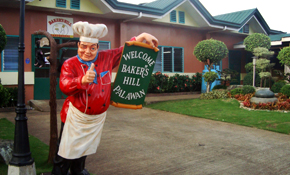 Baker’s Hill
Just a few steps away from Mitra’s Ranch is Baker’s Hill. Aside from a bakery, it also has a mini-theme park with botanical gardens, a children’s playground and a restaurant. Their freshly baked, melts-in-your-mouth ube hopia is a worthy contender to the best version you may have tasted elsewhere. 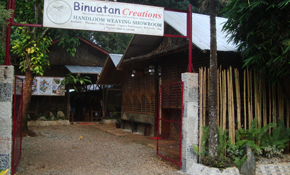 Pinagbuatan Creations
Pinagbuatan means ‘create’ in Cuyonin. This local craftshop specializes in woven handicrafts. There is also a showcase room for their finished products. Our guide mentioned that their products are bought by an unverified high fashion brand name overseas.

If you are traveling in a group, you could also embark on a DIY tour of some sort. My good friend who did just that last month included firefly watching at the Iwahig river as a romantic evening sidetrip. She added that I would probably not appreciate that because I was traveling alone.

Anyway, the five places mentioned above are the usual stops of a Puerto Princesa City tour package. It only costs Php500.00 which includes A/C van transfers, all the permits, tourist guide fee and accident insurance. I thought that it was a good deal considering that these destinations are located far apart.

But I did manage to make an accidental DIY-ish tour of the city for just Php14.00. The full account would be the subject of my next post.

Coron in 7 questions | a travel guide

Busuanga: a ruggedly beautiful, off the beaten adventure